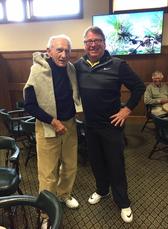 You never know who you are going to run into! During a January 2017 visit to Bay Hill Golf Club, in Orlando FL, Coyote Creek Golf Club's PGA Director of Golf Bill Blumenhurst, ran into Dow Finsterwald.

​     The Fort Wayne Open, which played for one year as Fort Wayne Invitational, was a golf tournament on the PGA Tour in the 1950s. It was played at the Orchard Ridge Country Club in 1950 before moving to the Fort Wayne Elks Lodge No. 155 golf course, now Coyote Creek Golf Club.

Past Champions of the Fort Wayne Open include:

Third at the 1963 PGA Championship. 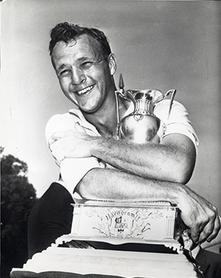 Perhaps the most popular golfer of all time earned his first official tour money at Coyote Creek Golf Club on May 29, 1955. This is truly a heritage Coyote Creek is very proud of.

After finishing his fourth round at the Fort Wayne Invitational, Palmer pocketed $145 for finishing T-25. It was the first official PGA Tour payday Palmer was allowed to keep, having served the long-since abandoned, six-month probation against earning money in tour events after turning pro.

which in turn increased prize money substantially. He was the first to make $100,000 in a season,

first to $1 million in career earnings and the first to make advertising marketability an art form,

something he still excels at today at age 85. The huge tour purses he helped grow came much

after Palmer was capable of winning on tour, but the money he was able to keep at the Fort

Wayne Invitational 60 years ago must have felt like a fortune at the time, which is what he

turned it into. - Golf Digest

Oh, and three years after his Fort Wayne Invitational placing, Palmer won the Master's in 1958.